The early season game went to overtime. UMS Wright had touchdowns called back due to penalties and Andalusia got the win.  For weeks they both knew this day was coming.  It is finally here as UMS Wright travels once again to Andalusia in a second battle of the Bulldogs in the ALFCA Game of the Week.

Both defenses have been dominant in the playoffs. “We probably have moved about five guys to different spots since the last time we played Andalusia,” UMS Wright Coach Terry Curtis said. “They are mostly the same guys, but they are just in different spots.”

The UMS defense has allowed only 28 points in three playoff games. They’ve also forced 20 turnovers. “We are playing much better overall,” Curtis said. “In football, if you know your position and your responsibilities you can play a lot faster. It’s like driving. If you are driving somewhere and you don’t know where you are going, you just kind of creep along looking for the right direction. But if you are familiar with your route you can get there much faster. It’s the same thing in football.”

The Andalusia defense had given up only 35 points.

The Andalusia defense has been excellent in the playoffs.  Photo credit Josh Dutton Andalusia Star News

“The old cliché says that it’s hard to beat a team twice,” Andalusia Coach Trent Taylor said. “It’s a cliché so there is at least a little truth to that. The biggest thing is that in the semifinals your are going to have two good teams and when two good teams play each other there are a lot of things that go into the outcome. Turnovers, mental mistakes and just being able to play well in all three aspects of the game are all going to be important. This will be the third game with them in almost a year. The first one down there was seven-point game, and this last one was a six-point game, so I would expect this to be another close game between two pretty evenly matched teams.”

Each team has an offensive star. Andalusia quarterback Ethan Wilson has been outstanding in his senior season, a quick runner and a very accurate deep passer. UMS Wright runner Symon Smith rushed for 201 yards in last week’s victory over Bibb County. 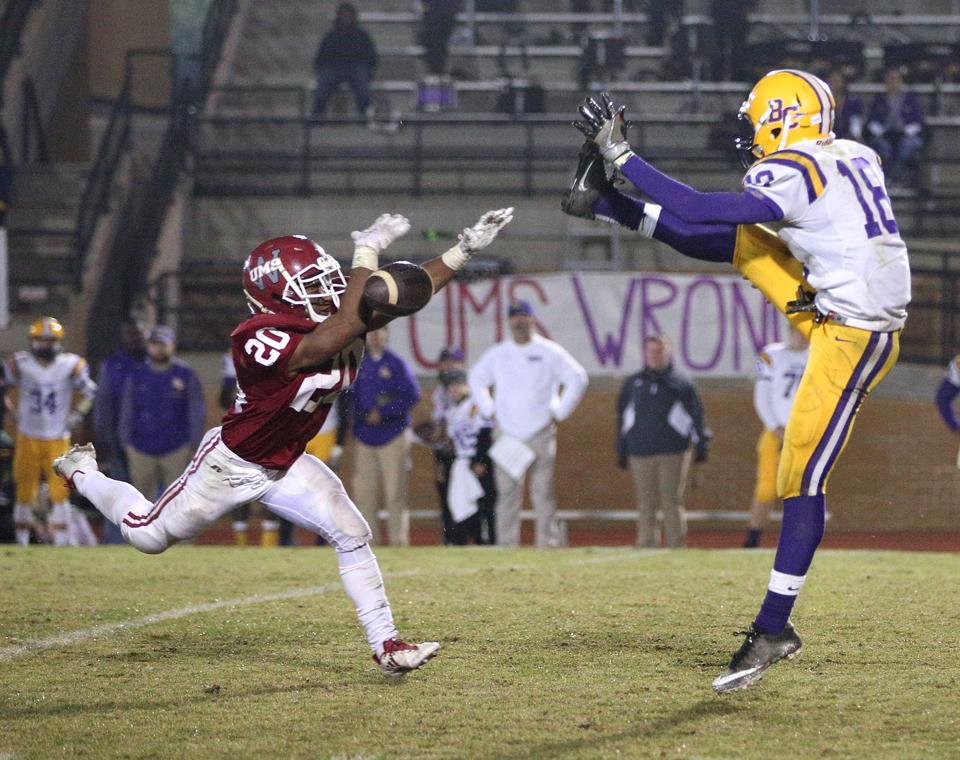 The kicking game is always important in big games. “One thing about UMS-Wright is that you know they are going to have a good kicking game,” Taylor said. “That is something that Terry (Curtis) has always focused on. We have to make sure that we have really good plan for the things they might do. Terry is a riverboat gambler of sorts and he is will make the call to run fakes. We have to be prepared for anything.”