Hoover, Thompson Battle for Region Championship in ALFCA Game of the Week

The two schools have been headed on a collision course since 7 on 7 this summer and the time has finally arrived.  Thompson (8-0) travels to Hoover (7-1) Friday night in one of the biggest games of the 2017 high school football season.

The two schools collide from different directions.  Thompson has never beaten Hoover and Coach Mark Freeman’s team has earned their first playoff spot since 2006. It has been twenty years since Thompson won a region championship. For Hoover, it’s their 18th straight post season berth. Hoover has won 10 state championships since 2000 and four in the last five years. Thompson is the latest football program in Alabama to challenge the superiority of the Buccaneers of Coach Josh Niblett.

Thompson has proven to be one of the state’s best offenses.  Led by transfer quarterback Taulia Tagovailoa, Thompson has scored at a rate of 43.8 points per game, third in the state. Tagovailoa has excellent receivers in Mo Edwards, Ahmad Edwards and Kyle Smoak.  The Warriors have two quality runners in Shad Byrd and Joseph Ford.  Their defense ranks ninth in 7A, giving up an average of 16.1 points per game. Thompson has not been challenged since they opened the season with a 21-20 over Hapeville Charter (Ga). 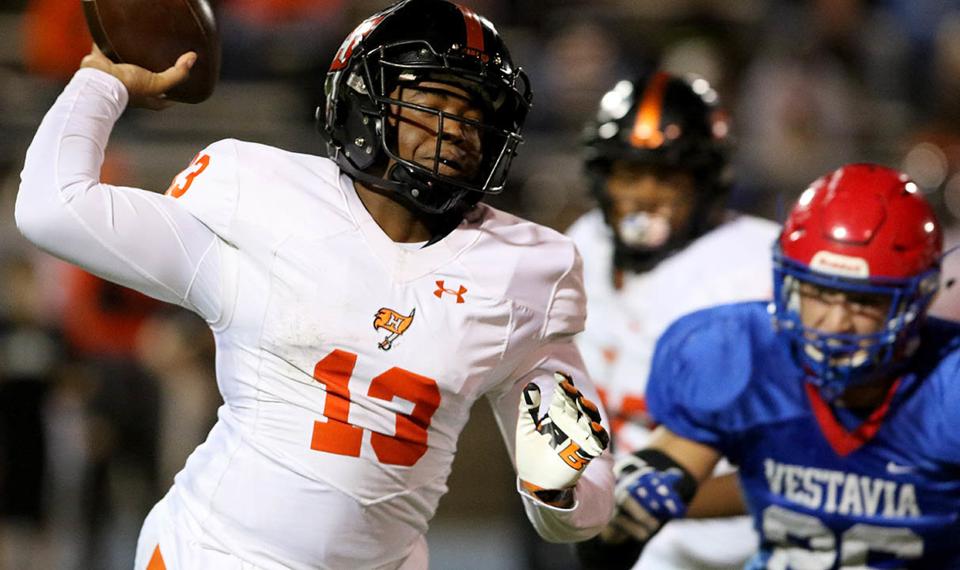 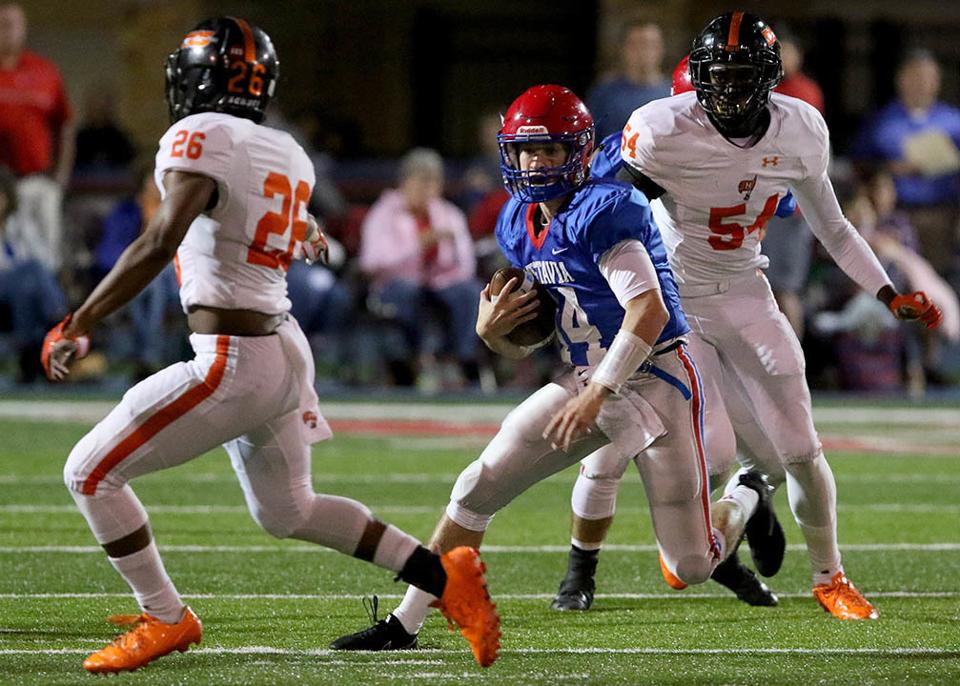 Thompson Coach Mark Freeman says that Tagovailoa’s greatest asset is something he brought with him when he entered the Warrior’s program. “Taulia came in with this great sense of confidence. He gets hit, gets sacked or throws a bad ball, he doesn’t let it bother him at all,” Freeman said. “He makes mistakes, but he always learns from them.” Freeman said that Tagovailoa has great character.  “Our players love him,” he said.

Freeman said his defense has grown as the year has gone by, the result of younger players that needed playing time to improve. ” We have two good outside linebackers, so we kind of play it outside in,” he said. “Our defensive staff has done a good job of allowing our players to do what they can do.”

Freeman believes that this Hoover team is very similar to past teams, maybe just a little bit bigger. “You won’t see a better looking team, and as usual they are extremely well coached” he said. “Hoover still thrives off of their great history and Josh and his staff do a great job of utilizing that.”

For Thompson the recipe to win the game is simple. “We must get off the field on third down and on offense we have to win some of those 50-50 balls down the field,” Freeman insisted. “And we absolutely cannot make any mistakes on special teams against this group.”

For Hoover’s Josh Niblett, last week’s victory over rival Vestavia Hills was an important win, but “we all knew what was in front of us this week.”  He admits that the Buc defense had struggled some early. “We had some younger guys on defense that replaced some really good seniors from last year. When you play good teams like Grayson (Ga.), they will expose your weaknesses in a hurry”, he said. “But the last few weeks, I believe we have gotten our edge back.”

Thompson’s offense will cause any team some major concern. “People talk about their passing game which is strong, but Thompson runs the ball really well because everyone is trying so hard to defend their passing game,” Niblett surveyed. “They are good at the RPO game.”  He added, “they can really play defense. They are strong in the box and have speed on the back end.”

Niblett knows that some of his players have been in some big games, but realizes that a few key younger players have not. “The first part of the game will be critical to us,” he said. “We must play with a sense of urgency. ” The Hoover coach said that his team is excited to be able to play in such a big game. “Our players have been pretty locked in this week” he stated.

Freeman also said his team was excited to play in such a big game. “But we realize there is a lot of football left to be played. We will play hard and we will be better for the playoffs because we played a team like Hoover.”

Hoover has the great tradition, a solid offense and defense, players who have seen the big time. Most of the season stats point to the upstart Warriors.  The weather could be wet, which means that the kicking game and ball security will be more important than normal in the biggest high school football game of the 2017 season.

Curtis Setting Milestones in Midst of Another Playoff Run